[Screenshot from video by Jason Truscott

Officers appeared to have a midsize white SUV pulled over on the northbound side of Highway 101 north of Benbow Sunday evening just before 7 p.m. The vehicles doors and trunk were open with luggage on the ground as well as a grey and pink car seat. 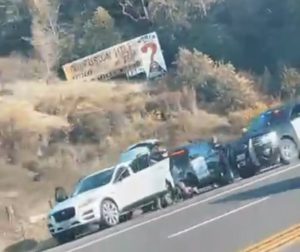 [Screenshot from video by Jason Truscott]

Sergeant Matthew Tomlin of the Humboldt County Drug Task Force confirmed that officers stopped a vehicle suspected of smuggling fentanyl into Humboldt County from Sacramento. Officers found a large quantity of fentanyl pills during the search. The driver of the vehicle was taken into custody.

Sargent Tomlin said more information will be released tomorrow regarding the bust.

Below is a short video clip submitted by Jason Truscott:

Remember that information gathered from initial reports is subject to revision as new facts become available. The information has not been proven in court and anyone portrayed should be presumed innocent until proven guilty.

Easter loans of a bit of amount